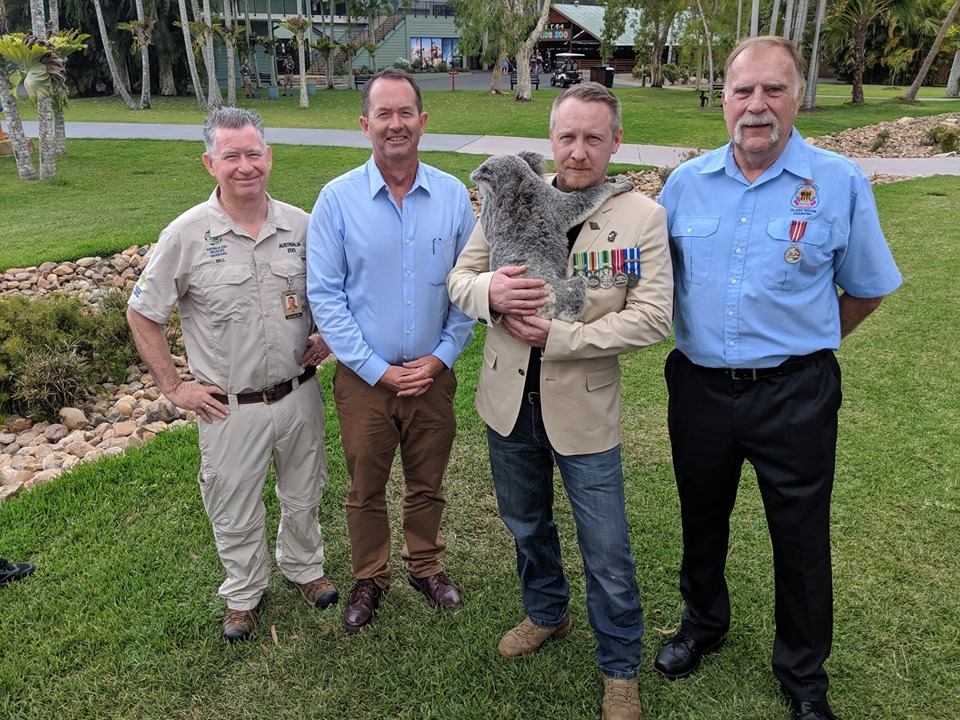 Former ADF personnel on the Sunshine Coast will enjoy a free visit to one of the Coast’s most loved tourist attractions and have a chance to meet Minister for Veterans Affairs Darren Chester on Sunshine Coast Veterans Day. Federal Member for Fisher Andrew Wallace and Australia Zoo’s Bill Ferguson announced the collaboration during a visit to the Coast’s Ultimate Wildlife Adventure.

Entry to Australia Zoo will be free for veterans, plus one guest each, on Monday 28 October 2019 as part of the initiative, which Mr Wallace has named Sunshine Coast Veterans Day. However, in a special extra twist, this year the Federal Minister for Veterans Affairs Darren Chester will join local service men and women in touring the Zoo on the day.

Mr Wallace said “The men and women of the ADF are courageous, dedicated and highly professional. They work hard, and make huge sacrifices to keep all of us safe and we owe them a great debt of gratitude. Since my election in 2016 I have worked hard to honour and value that contribution by advocating for real action to support veterans as they transition back into civilian life. Veterans know that spending time with mates who understand their service can really help to improve their mental health and this, the second annual Sunshine Coast Veterans Day, is designed to give them a great opportunity to do that.”

Veterans will simply have to show their Veteran Lapel Pin, White or Gold Veteran Card, or other proof of service to get free all day entry to the Zoo. Veterans who do not have proof of service are encouraged to contact their local RSL sub-branch or the office of Andrew Wallace. Australia Zoo is one of the country’s best known wildlife attractions, with more than 1,200 animals and a wide variety of exhibits and experiences to enjoy.

Bill Ferguson, Government Relations Manager of Australia Zoo said it was always a pleasure for the zoo to be able to give back to our local veterans.

“They’ve played an important role in the life we all live today and Australia Zoo has had a long history of supporting our veterans and their spouses. We encourage all veterans to come along to the Zoo on October 28th with their proof of service for a fun day out at the best conservation destination in the entire world!” said Bill.

The Sunshine Coast Veterans Day initiative, now in its second year, is part of a series of activities Mr Wallace has pursued on the Coast to support local veterans’ mental health and employment prospects. The presence of the Minister for Veterans Affairs this year will give former service men and women the chance to provide direct feedback to the Government on the services that they need.

Mr Wallace said “We have an estimated 15,000 veterans living here on the Sunshine Coast. Ours is one of the largest veterans’ communities in Australia and it is critical that their voices are heard in the national debate. I have advocated strongly on their behalf in Canberra, but there is no substitute for giving veterans the opportunity to speak for themselves. I can’t wait to introduce the Minister to many more of our former service men and women on the day.”

For more information, contact the Office of Andrew Wallace MP on 07 5493 5556 or andrew.wallace.mp@aph.gov.au.