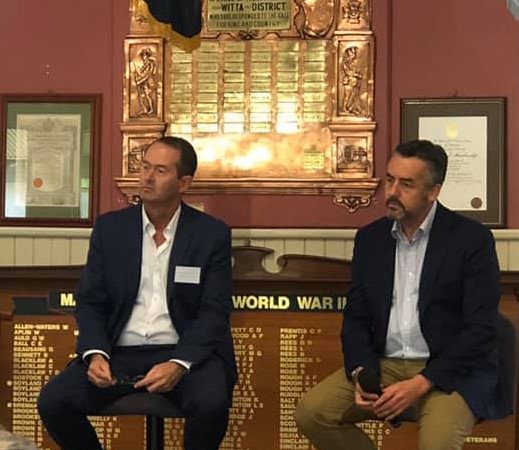 The Hon. Darren Chester, Minister for Veteran’s Affairs, came along to breakfast at RSL Maleny during Veteran’s Health Week. He spoke about new directions being untertaken by DVA to address the current and future needs of veterans.

After being introduced by Member for Fisher, Andrew Wallace, Darren outlined the Federal Government support for Veterans and highlighted the changing attitudes to defence and ex-defence personnel. He described a beneficial (rather than adversarial) approach to legislation especially in relation to DVA claims.

It was also an opportunity for veterans to interact directly with the Minister about issues concerning veterans on the Sunshine Coast. Darren Chester spoke about the federal Government support for veterans including, the new lapel pin and covenant, Veteran’s cards and support dogs.

He acknowledged there are around 15 000 veterans on Sunshine Coast. The Federal Government is currently working towards a safer, stronger and better Australia and that Defence personnel play a key role in this endeavour.

The Government wants to encourage young people to join the Australian Defence Force as an opportunity to get a good trade and ongoing professional training and education. However, once out of the defence service, veterans need to be properly supported in transitioning to civilian life and future career prospects. He noted that currently the average length of service is 7-8 years and that the ADF is looking to increase retention rates among new personnel.

DVA is currently working with industry and business to change attitudes to former defence service men and women to ensure they are able to attain gainful employment. Prospective employers are encouragewd to recognise the benefits of employing former ADF personnel by recognising the resilience, team work and problem solving skills and leadership potential they bring to the employment sector.

DVA is working towards providing a beneficial approach to legislation – leaning forward rather than trying to block claims. Some new initiatives include provision of free mental health auto payment as soon as a claim is made and to cover income while the claim is assessed.

He acknowledged that there needs to be further initiatives to improve the quality of life post-service e.g. to promote active involvement in the RSL.

Darren said that there are currently 3000 groups representing veterans in Australia – he wants a peak group to approach him with good ideas e.g. to support contemporary veterans. Questions were fielded by veterans attending the breakfast and Darren appreciated this interaction with veterans to gain a better understanding about concerns and issues affecting veteran’s today.