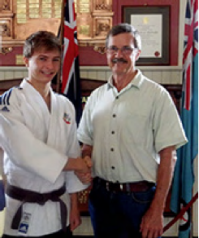 This article courtesy of MDSRC Newsletter

Whilst most of us are sleeping, Maleny grade 12 student Harry Cauley is already at the local gym, or working on fitness training on the Showgrounds. Then it’s off to school, before his dad, electrician Glen Cauley, drives them to Brisbane after work for judo coaching sessions 3 times a week with Harry’s new coach, Patrick Mahon.

After winning silver in the U/55 kg U/17’s at the Oceania Judo Union Championships in Auckland in April, he’s in training for the up- coming Australian Titles, and says his dad – judo coach and founder of Maleny Judo Club, drives about 500 km weekly. Harry’s also studying hard at school.

Asked how he balances the two, he demurely says that it’s a challenge “I couldn’t do any of it without mum and dad – they really help out a lot. I do a lot of school study on week- ends”. He speaks of the significant role Maleny RSL has played, by supporting his application for the RSL’s National Youth Development Program.

The funds received assisted Harry to go to necessary training in Munich late last year, and to compete in open International events in Canberra and Brisbane, prior to the Oceania Competition, where Australia competed with 17 countries. Gr 10 & 11 Students from across Qld can apply online if they have demonstrated excellence in academic, community and sporting achievements.

Maleny RSL’s Chris Brooker and Paul Gilmour-Walsh fully supported Harry’s application and are pleased with the feed-back he’s provided since – “an important part of the whole process for the RSL, and encouragement for others who want to get involved” said Chris. “So ?far, we’ve applied 7 times for local students, covering academic as well as sporting pursuits, and only hadone knocked back.”

Harry, and his family, acknowledge how living in a close-knit town has been incredible – “Maleny Gym for instance sponsored a free season pass to help de- fray costs, Tim Bagshaw at Maleny Physiotherapy has taped and strapped me together again with the many injuries that come with contact sport. And Dr Shane Lu- land From Landsborough Medical Centre made himself freely avail- able after hours when I received a broken nose and toe just before a major competition this year. I’d like to thank John Pirie, Chiropractor, for his ongoing assistance.

We are so lucky to live in a community like Maleny and have access to all of these professionals. Andrew Powell, Maleny District Sport and Rec club, the High School’s Brian Wilkinson have all played an important part, supporting my endeavours.”

Harry does have other interests – he loves the beach and has played soccer, union and AFL but realized his dream was to get as far as he could in a sport, so for now is totally focused on judo.

Making it to the to the gold level fight and winning silver is his proudest moment so far, and it was against another Aussie, whom he relishes meeting again in the up- coming comp in Sydney soon. And his goals right now? “To medal?  in the Nationals and to finish Year 12 with highest grade I can.

I’m deferring Uni for a year and looking forward to starting an electrician’s apprenticeship with dad – judo will always be part of my life but I’m not sure yet exactly what I want to do, and dad knows a lot of really useful stuff ”.

So what would this quietly determined young man say to others who may think they can’t do what he has done? “Just don’t limit yourself, and try your best at everything you do – you don’t know where things can lead.”

There are no comments yet